Sonic Drilling is 3-5 times and as much as 10 times faster than conventional drilling methods in most lithologies. The vibration induced in the drill string from the head fluidizes the formation in a very small boundary layer around the drill string. This fluidization results in a dramatic reduction in friction, maximizing the penetration rate.

Sonic Drilling can create nearly continuous in-situ core samples. The ease with which the drill string passes through most formations means the core sample remains intact, providing an excellent and accurate representation of the formation being evaluated.

The Sonic Drilling process creates a fully cased borehole in which the well can be installed without cave-in or collapse. The well is installed inside the casing, which can then be extracted through the use of gentle vibration. This vibration prevents bridging of the sand pack and ensures that the sand pack is spread evenly around the screen.

Sonic Drilling can reduce investigative derived waste (IDW) by as much as 80%. Sonic Drilling does not necessarily require the use of water or mud and the IDW is often limited to the volume of your core samples. This significantly reduces waste disposal and clean-up costs.

Sonic Drilling addresses several key safety concerns including slips, trips, and falls; body strains, and exposure to machinery or chemicals. There are no auger flights, so there is a lower risk of exposure to the machinery during drilling. Soil samples are contained inside the core barrel and vibrated into a sealed PVC sleeve that minimizes exposure to potentially hazardous substances. Less IDW generated reduces the need to transport or handle material—resulting in a neater and safer work area.

Sonic Drilling can be used in most formations, including cobbles, boulders, hard layers/lenses, and heaving sands without refusal and with a less than 1% deviation from the intended hole profile. Sonic Drilling creates boreholes correctly on the first pass, saving time and money.

Sonic Drilling provides superior versatility for many applications. It can be used for angle or multi-cased wells without leaving the casing in the ground and can shift to split spoons, Shelby tubes and/or diamond coring. Sonic Drilling can easily be adapted for rock drilling with the use of the sonic percussive method or a down-the-hole hammer. 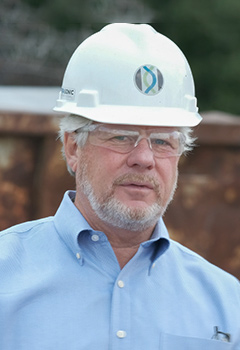